LICAT was founded in Turin in 1961 by Vittorio Apicella, and our first factory was situated in the well-known industrial area of “Borgo San Paolo”. As a chosen supplier to major national manufacturers, the company has always specialised both in the construction of special transmission parts and in the manufacture of precision gearing systems.

The rapid growth of the company during the following years forced LICAT to transfer to a larger site and in 1967 the company moved to the new industrial area in Grugliasco, just outside Turin, and later, in 1974 a second plant was built in Alpignano, which specialised in the manufacture of ground racks and large size gears and pinions.

Then, in 1996, the two production units were brought together in an extensive new site near Rivoli. Finally in 2009, all production activities were transferred to our own new factory in the industrial area of Orbassano, with this site having two separate sectors, one dedicated to standard high precision linear transmission systems, with the other setup for specific products as requested by customers.

In 2022, the entire shareholding is sold to the holding company of the Romani Components Group of Milan, leader in linear transmission and dealer/distributor of more than 15 primary brands for the Italian and European markets. This synergy allows LICAT to further develop its production capacity of catalog products and to increase its presence in the territory, thanks to a more widespread presence guaranteed by the sales network of Romani Components.

Usually, The use of both these new production facilities has made it possible for LICAT to increase and update its machinery, equipment and productive capacity. LICAT is especially competitive in supplying high precision gears, racks and pinions, complete solutions for linear transmission systems, worm gears, spline shafts, toothed sectors, couplings and frontal inserts, both as a small series or as individual items.

LICAT is normally capable of satisfying total customer needs, including material supply, heat treatment, complete machining and testing. Orders can also be taken for specific process operations, with material supplied by the customer.

LICAT frequently works with internationally recognised organisations such as the Registro Italiano Navale, Lloyd’s Register of Shipping, American Bureau of Shipping, the Italian Navy, Italian Railways, etc. and is directly responsible for destructive / non-destructive testing and inspection, using internal personnel in accordance with the SNT regulations.

Last week we were present at the MECSPE 2021 exhibition at BolognaFiere, with our partners of Romani Components group: SBC Linear, Sesame and... 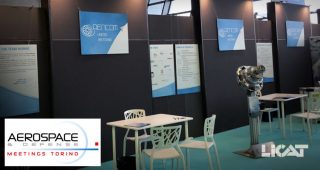 The ADM 2021, Aerospace Defense Meetings Torino (Italy) event begins today. The eighth edition, for which we participate together with Aencom, a...

Licat obtains the certification of its QHSE integrated Management System 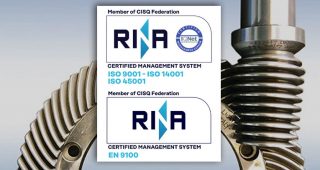 R.I.N.A.certification for our Integrated Management System We are pleased to announce that we have reached the important goal of certification by...